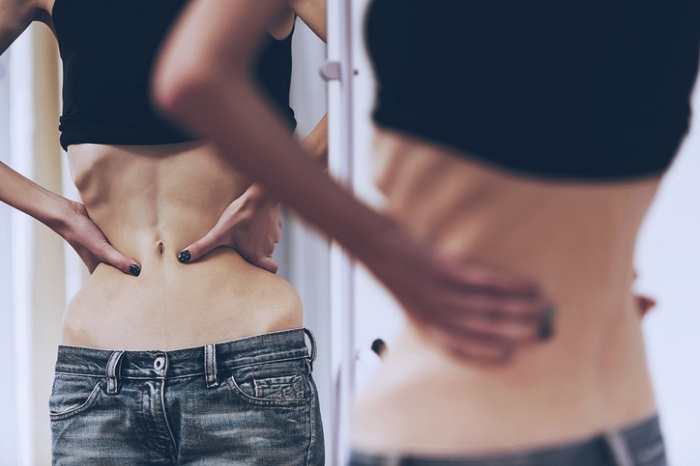 One of the most well-known eating disorders is anorexia – also known as anorexia nervosa. Those affected by this condition have such a distorted perception of their own bodies that they are afraid of gaining weight. This is why they often refuse to eat.

Over 100,000[1] people in the UK have anorexia. Those who are most affected are women between the ages of 15 and 35. In the case of boys and men, the numbers are slightly lower, but no less worrying. For many people, the ideal of beauty is often still best embodied by those who are particularly slim. According to experts, this social pressure is fuelling the rise in the number of those affected by this medical condition.

Anorexia nervosa is diagnosed as a form of mental illness. However, this is not to say that genetic predispositions and social causes do not play a role. In the case of anorexia, CBD can help in a number of ways. On the one hand, CBD’s mood-improving effects can be helpful here to alleviate the depression that often goes hand in hand with anorexia. On the other, CBD can stimulate the appetite of those with anorexia, depending on the user. It is important to note that anorexia has one of the highest mortality rates of all mental illnesses. About 15 percent of those affected die as a result of malnutrition or commit suicide.

Anorexia seems to be caused by various factors and possibly by the way in which they interact. The current state of research is such that no sole cause has yet been identified. However, there is fundamental agreement amongst doctors and psychologists that a combination of social, genetic and psychological factors probably plays a role. Studies of those with anorexia show that it involves changes in brain function. Whether this is a cause or a consequence of the condition has not yet been clarified.

The factors which together appear to favour or even trigger anorexia are genetic (family) predisposition, the social pressure of beauty ideals, lack of self-esteem, and family-level causes, which still require further research.

Often, an initial phase of depression can also cause people to slip into anorexia. In these cases CBD can have a preventive and mood-improving effect, which can help against anorexia.

Another factor which is not yet fully proven, but which is nevertheless listed here, is an additional physical cause: It is suspected that irregular hormone production also promotes anorexia.

Treatment for those with anorexia is often made considerably more difficult by the fact that those affected do not realise that they actually suffer from an illness. If, however, anorexia patients opt for a largely inpatient-based course of treatment (removing them from the pathogenic environment), methods from depth psychology, behavioural therapy and, in most cases, systemic therapy are often applied. In the case of the latter, it is not just the affected person who is involved, but also their whole family.

Psychodynamic treatment approaches aim to bring unconscious conflicts which may have led to the eating disorder to the patient’s attention. One aim which all of the therapeutic approaches share is that of normalising the patient’s relationship with food, influencing their distorted perception of their bodies and increasing their social competence in general. In the case of anorexia, CBD can, for example, help to improve the patient’s relationship with food by specifically influencing the sensation of hunger.

CBD and anorexia – How can cannabidiol help?

Many studies[2] have addressed the positive properties which CBD can have when it comes to anorexia and other eating disorders. These studies and others provide grounds to conclude that CBD can help to stimulate the appetite of those with anorexia. As a result, those affected no longer see food as the “enemy”, but increasingly as a source of pleasure. It should be noted, however, that some users also seem to have had quite the opposite experience when using CBD. It is therefore essential to find out how CBD works in your particular case.

In the form of CBD oil, CBD e-liquid, CBD salves and ointments, or CBD cream, CBD exerts its influence via the body’s own endocannabinoid system; the ECS. Recent research[3] suggests that the ECS may have a significant relationship with anorexia. The release of the messenger chemical ghrelin is controlled by the ECS[4]. If this process is disrupted, the result can be dramatic weight loss. Via the ECS, CBD can exert a regulatory effect on the release and production of this messenger chemical.

In one study, scientists compared the brains of women with and without anorexia[5]. It was shown that patients with anorexia had a significant increase in the density of CB1 receptors in certain regions of the brain in comparison with women who did not suffer from anorexia. In addition, the concentration of natural cannabinoids in the body was significantly lower in patients with anorexia. It appears that CBD can be used to regulate anorexia.

The ECS is also responsible for the brain’s reaction to the consumption of food. The messenger substances from the endocannabinoid system signal whether a person is hungry or full. In anorexics, the sending of messenger substances to the brain is disturbed. For those with anorexia, CBD is thought to help in renormalising these processes.

In the case of anorexia, CBD can also help in the treatment of the mental consequences of the condition. Although CBD does not have the psychoactive effect of its chemical relative THC, it does have a calming effect. Thus, states of anxiety triggered by having a distorted body image can be treated, as can the depression caused by distorted perceptions of oneself and of others.