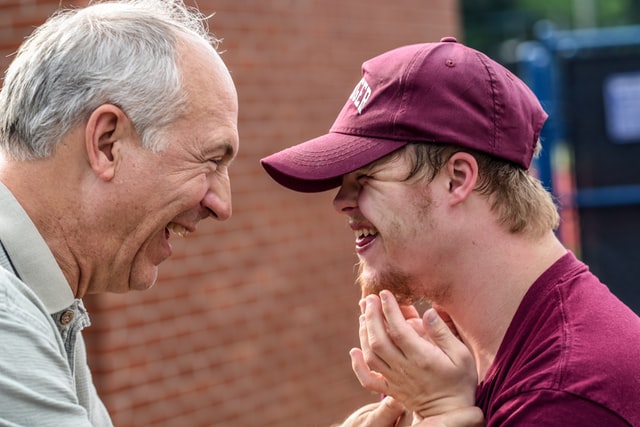 According to the World Health Organization (WHO), autism, which is also referred to as Autism Spectrum Disorder (ASD), is considered to be a serious developmental disorder. Intelligence aside, neurological factors mean that autistic people often lack the ability to interpret emotional and social signals. Here, the problem does not simply involve one’s ability to interpret the emotions of others: more than anything else, displaying an appropriate emotional reaction to an environmental stimulus is difficult, or even impossible, for those affected. This has led to the classification of autism as being a serious contact or relationship disorder.

Generally, people with autism find it difficult to cope with change. It is particularly difficult for autistic people to move flexibly from one social situation to another in a manner which is socially accepted. At such times as these, autistic people can react to these situations, which they find so uncomfortable, with sudden outbursts of aggression.

In addition to these fits of rage, restlessness and nervousness are amongst the most common external features of the condition. Cannabidiol (also known as CBD) shows promise of being able to alleviate these symptoms. Cannabidiol is a product of the hemp plant. Unlike THC, which is a related substance, CBD is not psychoactive, does not cause intoxication, and is not addictive.

At present, autism is classified into three categories – childhood autism, Asperger syndrome, and atypical autism. The three differ from each other in their characteristics. The differences between the three types primarily relate to how they manifest, the severity with which they are expressed and the degree of additional impairment due to other disabilities and disorders.

At present, science has not been able to to identify any single factor which is sufficient to trigger autism by itself. Researchers have come to suspect three possible causes. The first is genetics, the second is disturbances to brain development and the third is brain metabolism.

Additional symptoms of autism include epilepsy, cerebral palsy, hetero-aggression and auto-aggression, as well as eating disorders and sleep disorders. These are all aspects of autism which CBD can address, providing relief and periods of calm and balance to autistic people and those around them.

How medicines/treatments for autism work

Autism is dealt with using drug-based treatments and therapeutic measures. According to the current state of knowledge, neither will result in a cure, but they can contribute to an improvement in quality of life.

The treatment of symptoms of autism can only occur if two conditions are fulfilled – there must be close observation of the person concerned and regular consultation with a specialist must take place. Thus, conditions associated with autism such as depression, anxiety, aggressive behaviour can be treated within the context of a therapeutic approach, using antidepressants or antipsychotics, for example.

Such therapies include, for example, therapy for parents, as well as the actual behavioural therapy for the individual affected.

CBD and Autism – What does cannabidiol do?

Researchers in Israel carried out a study in order to research the impacts of CBD on autism[1]. For the purpose of this study, ASD patients were given preparations containing high doses of CBD. According to the study, the daily administration of CBD to treat autism improved symptoms of restlessness, aggression and nervousness in about 80% of the study participants. The families of the test subjects not only stated that the everyday life of the person concerned had improved, but that the situation in the subjects’ immediate social environment had also done so.

The results of this study show that CBD can make a substantial contribution to improving the circumstances of those with ASD. Here is a brief overview of the results in greater detail.

Based on the fact that CBD oils and other CBD products have an ameliorating and thus positive effect when it comes to relieving anxiety, psychosis or seizures, researchers have conducted a study[2] to see whether these effects could also reduce the symptoms of ASD. Amongst other things, it was found that CBD, when used in cases of autism, can lead not only to a significant alleviation of anxiety, but also to an improvement in the ability to communicate and in the processing of (flexible) stress.

In a manner which complements many therapies, CBD helps with autism by activating CBD receptors in the endocannabinoid system. This component of the nervous system runs throughout the body and is closely associated with the development of the brain. Research in this area is still incomplete, but according to the current state of knowledge, a lack of ECS receptors could be a cause of the anxiety which also often occurs in those with autism. This encourages the conclusion that, by way of the ECS, CBD may be helpful in augmenting autism therapy.

Autism can also cause movement disorders due to a partial lack of control over muscle contractions. For those nearby, these have the appearance of spastic seizures. The muscles cramp and the person affected experiences great pain. In such cases, CBD can help in two different ways. Firstly, CBD helps those with autism by having an antispasmodic effect on the muscles,  and secondly, it dulls the pain if the cramps are too extreme. Many sufferers take high doses of painkillers against the pain. The supplementary use of CBD can mean that these doses can be reduced.

Being a constituent compound of cannabis, CBD can also increase one’s appetite. Thus CBD can specifically help those with autism who have been refusing to eat due to acute loss of appetite.