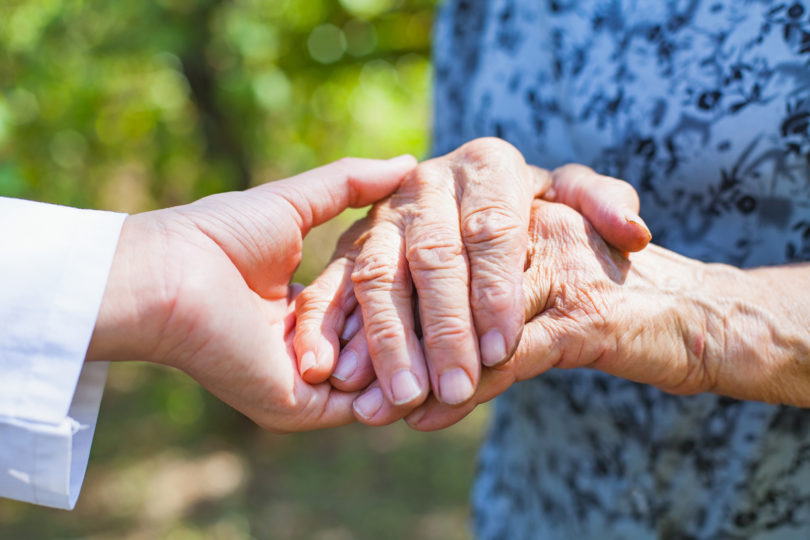 Parkinson’s disease is classified as a degenerative disease as it leads to progressive loss in the form of the degeneration of nerve cells. The disease not only restricts motor abilities, but also results in tremors and similar movement disorders.

Cannabidiol, or CBD for short, is a natural product derived from the hemp plant. In contrast to the related compound THC, CBD is legal, as it is neither psychoactive nor does it cause addiction or states of intoxication.

Causes and symptoms of Parkinson’s

Current research distinguishes between three overarching causes of Parkinson’s disease. These are: the body’s own lack of dopamine, a cellular-synaptic disorder, and causes which are external to the body.

The messenger chemical dopamine is produced in the brain. In simple terms, dopamine is produced in the basal ganglia. Parkinson’s prevents this production from taking place. Ultimately, this dopamine deficiency results in motor disorders and a slowing down in brain processes. Conversely, this means that increased levels of dopamine inhibit the medical conditions. One of the reasons why CBD is used in cases of Parkinson’s disease is because CBD stimulates the production of dopamine when it docks on to the endocannabinoid system, which is part of the nervous system.

In recent years, investigations have begun which have been prompted by the theory that Parkinson’s disease may also have cellular causes. In this area, too few studies are available at present to be able to establish the efficacy of CBD against Parkinson’s disease. External causes are assumed to include neurotoxins and the craniocerebral trauma which can result from an accident.

How medication for Parkinson’s disease works

As Parkinson’s disease is attributed to a lack of dopamine in the majority of diagnosed cases, this is what most Parkinson’s medication addresses. Therapeutic measures supply the brain with dopamine in the form of L-DOPA and dopamine-like substances. These are also intended to stop dopamine from being broken down straight away. The lack of dopamine results in an excess of actylcholine in the brain, which these medicines are also intended to compensate for.

CBD and Parkinson’s – How can cannabidiol help?

Empirical studies based on interviews with patients suggest that, in cases of Parkinson’s disease, CBD oil can significantly increase people’s well-being. There have been repeated reports of reductions in levels of extreme pain. In addition, CBD oil can stimulate the appetite and improve sleep behaviour, as the analgesic effect significantly reduces the fear of being woken by pain during the night. Cannabidiol achieves this effect in cases of Parkinson’s disease as CBD not only has anticonvulsant effects, but also acts as an analgesic (painkiller).

For many who suffer from Parkinson’s disease, the motor disorders of the musculoskeletal system represent one of the worst problems affecting their everyday lives. To date, research has suggested that CBD has a fast-acting regulatory effect on Parkinson’s disease which, among other things, reduces or alleviates tremors and some uncontrolled spastic movements. Even speech disorders, which make it considerably more difficult for many of those affected to deal with their families and their careers, have been considerably alleviated through the use of CBD.

It is important to mention that when it comes to the positive characteristics of CBD in cases of Parkinson’s disease, the possible effects mentioned above can essentially only occur when treatment is provided on a daily basis, and using high doses. Test subjects report that the positive properties of CBD oil when used for Parkinson’s disease only began to show with doses which exceed the guideline value of 300mg. Above this CBD dosage, however, the CBD products succeeded in significantly increasing the well-being of patients.

In no study have CBD products such as CBD oil, CBD e-liquids, CBD salves and ointments, and CBD creams been able to cure Parkinson’s disease or decisively influence the causes of the disease. Thus far, CBD has only been found to help against the symptoms of Parkinson’s disease.

It is also important to mention that you would always be well-advised to seek medical assistance for an illness as serious as Parkinson’s disease. Additionally, possible interactions between CBD and new and revolutionary Parkinson’s drugs means that consultation with the relevant doctor should always be sought.