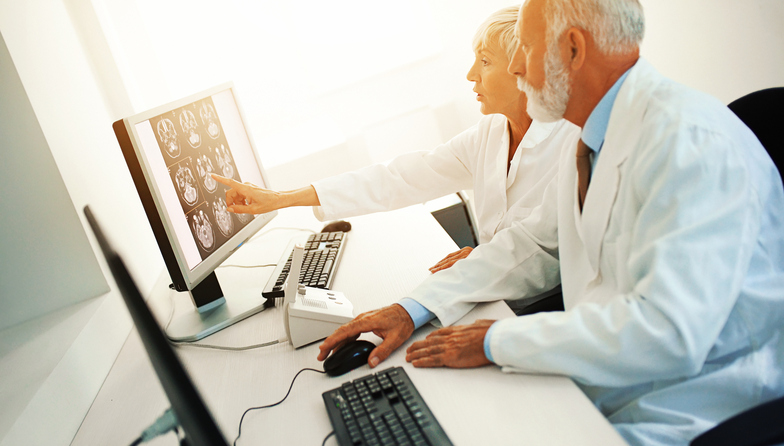 Strokes: they usually strike suddenly and without warning. This cerebrovascular disease of the brain can also lead to extended disruptions of important functions of the central nervous system. Strokes are often triggered by a severe drop in the supply of blood to the brain.

Experts believe that roughly 270,000 people are affected by strokes each year in Germany. This makes strokes one of the most common medical conditions in the country. The main threat here is the fact that, within the first year of the disease, between 20 and 30% of those affected end up dying. At 6%, cerebrovascular diseases account for a high proportion of the deaths occurring in Germany. Many of those affected suffer from severe disabilities as a consequence. The statistics show that advanced age plays a role. Over 50% of all strokes occur in those over the age of 75.

As a non-psychoactive constituent of the hemp plant, CBD can, for example, play a helpful role in the care of patients in the aftermath of a stroke. There are studies which have concluded that CBD can even reduce the risk of strokes occurring in the first place. (Read more about CBD)

The causes of strokes

Extensive research has now been carried out into the causes of strokes. According to the current state of knowledge, spontaneous bleeding with the failure of blood clotting processes, vascular cramps with subsequent vascular constriction, venous thromboses, arterial embolisms as well as vascular tears and subdural and epidural haematomas can all result in strokes.

About 80% of all strokes are caused by circulatory disorders occurring in the brain. In such instances, deposits are present on the inner walls of the arteries, constricting or closing the blood vessels. Because of this, parts of the brain are no longer supplied with enough oxygen and become damaged. Nerve cells die off. The severity of the stroke usually depends on the number and size of the arteries and the extent of the disturbance.

There are factors which increase the risk of a stroke. These include being genetically predisposed, having high blood pressure, smoking, diabetes, heart diseases, fat metabolism disorders, being overweight, excessive consumption of alcohol, excessive stress and lack of exercise.

Due to its stress-reducing and calming properties, for example, CBD can help to prevent strokes. By means of the endocannabinoid system (ECS) CBD can also have a regulatory effect on the metabolism.

If someone suffers a stroke, what happens in the few minutes which follow can be crucial. This period, which is referred to as door-to-needle time should not exceed one hour – by which time, help should have arrived. As soon as a stroke is recognised, an emergency call should be made to an emergency doctor. The person affected should be kept calm and should neither eat nor drink. More importantly than anything else, it must be ensured that transport to a hospital takes place as quickly as possible.

In the case of ischaemic strokes, thrombolytic medication is also used. This medication dissolves blood clots, thus fending off permanent brain damage. The removal of the blood clot by means of a catheter can also help.

In order to reduce the risk of strokes, normal blood pressure and healthy blood sugar levels should be maintained, and smokers should stop smoking. Simply having blood pressure in the normal clinical range reduces the risk of having a stroke by 60%. An increase in blood pressure is often the result of stress. CBD can reduce stress and improve one’s mood. CBD can thus be used preventatively in the case of strokes.

CBD and strokes – How cannabidiol can help

One thing should be made clear at this point: CBD cannot help in the case of an acute stroke. The strengths of CBD for strokes lie above all in the areas of prevention and aftercare. For example, CBD can help reduce the risk of a stroke  by helping to free people from their nicotine addiction. CBD can, for example, help to inhibit cravings for nicotine, as well as for alcohol[1]

A stroke can also be triggered by a slight inflammation of the heart muscle. Such inflammations can be caused by flu-like infections or even colds. In the case of strokes and other diseases, CBD has an anti-inflammatory effect. CBD also has the effect of dilating the arteries and veins. This improves blood circulation throughout the body and counteracts organs being damaged by a lack of blood supply.

Anticoagulants (blood thinners) such as heparin, are often used in the case of strokes. These improve the circulation of the blood. When used in combination with CBD, a noticeable increase in blood flow can be achieved.  This can contribute to the prevention of long-term damage to the brain following a stroke.

It is not just lifestyle, but also genetic characteristics which can cause strokes. These factors also include having a porous carotid artery. In the case of strokes, CBD can be helpful here, as it stimulates the renewal of tissue cells, including those of the carotid artery.

Having had such an extreme experience, people affected by strokes often suffer from anxiety or depression afterwards. CBD’s special properties can also be an advantage here. Following a stroke, CBD can have a mood-improving, stress-reducing and, more especially, an anxiety-relieving effect. CBD can thus either alleviate, contain or even prevent mental stress following a stroke.

It is often reported that strokes can also be accompanied by severe pain. Following a stroke, the pain described by patients who had already been taking CBD as a preventative measure before suffering the stroke was significantly less severe than that described by other patients.