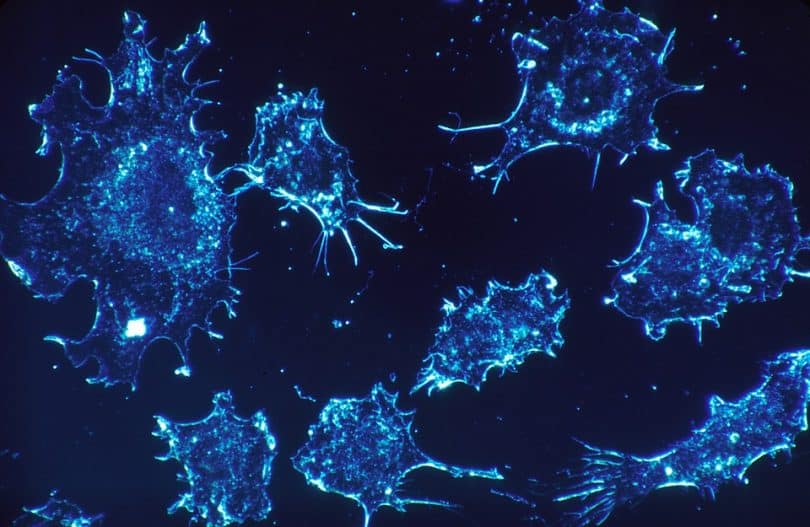 In 2020 alone, more than 19 million people around the world were newly diagnosed with cancer. According to WHO, 9.9 million died of cancer during the same period. WHO has also published figures which show that the rate of new cases has been rising steadily for years. Counterintuitively, much of this increase has to do with the increase in life expectancy, as many kinds of cancer only develop with advancing years.

Researchers and oncologists all over the world have dedicated themselves to the topic of cancer. Globally, work has been going on for many years to not just to keep the scourge of cancer in check, but also to defeat it completely one day.

Cannabis oil with CBD and cancer

Many readers of this article will simply be wondering: does CBD help in treating cancer? This question can be answered with a “yes”.

But this “yes” is one which involves a bit of scrutiny and differentiation. There are many high-quality studies which demonstrate the alleviation and improvement of the physical complaints of cancer patients. Other studies conclude that cannabidiol can slow down or even inhibit the growth of cancers by interfering with cellular metabolism.

Research has shown that CBD (What is CBD?) can interfere with the metabolism of cancer cells, hindering intercellular communication. But what causes cancer?

The causes of cancer

Homeostasis refers to the healthy and balanced cellular growth of biological organisms. This is a situation where there is a balance between cell proliferation (cell division) and cell death. Tumours and subsequent metastatic spread occur when the aforementioned equilibrium is altered in favour of cell proliferation. The reason for this imbalance lies in errors in the genetic code – the causes can be intrinsic or extrinsic .

There is, unfortunately, a great variety of extrinsic (i.e. external) causes. These include environmental toxins, radiation, viruses, poor diet, the consumption of alcohol and tobacco, and infections. Almost every day, researchers discover more substances or other causes that are suspected of either triggering or promoting cancer.

“Benign or malignant?” this is the question which incessantly buzzes in the mind of everyone who has to go to a medical facility for a tumour examination. And when the findings indicate that it is a malignant tumour, the world falls apart.

Oncology recognises three kinds of malign cancer – destructive, metastasising and infiltrating. Destructive tumours destroy surrounding tissue. Infiltrating tumours grow into neighbouring tissues in an uncontrolled manner. These who kinds of cancer have the “advantage”, of being easy to locate. When it comes to metastasising tumours, the situation is different. These form metastases, for example via the lymphatic system and blood vessels, creating offshoots of themselves in distant parts of the body. Although it is possible to determine the source of the metastasis, it is never 100 percent certain that every metastasis has been detected and removed.

Fundamentally, cancer medicines can be divided into two groups – those used for curable cancers and those used in the case of cancers which have no chance of being cured.

Resections are one of the options offered by surgeons in consultation with oncologists. This is where the tumour, the affected tissue and, in many cases, nearby lymph nodes, are surgically removed.

In the realm of therapeutic approaches, a distinction is made between radiation treatment and medication-based treatment. Using high-frequency radiation such as X-rays in combination with the ingestion of radioactive iodine, an attempt is made to stop the growth of cancer cells, or even to bring about regression. The side effects involved are serious. The most well-known medication-based cancer treatment is chemotherapy. The aim of this approach is to slow or halt the rate at which the cancer cells divide.

This is merely a simplified, incomplete overview of current possibilities when it comes to treating cancer, which ignores the use of CBD.

CBD and cancer – what does cannabidiol do?

Once the disease has struck, CBD can help with cancer in many ways. Even small tumours can subject patients to a great deal of pain, and large ones more so. The pain-relieving effects of CBD, especially those resulting from the interaction of the active substance with the pain receptors, promise rapid relief for patients who suffer from pain. The chemotherapy described above is one of the most radical interventions which can be made in the human body. Generally, the response involves nausea and vomiting. Cannabidiol ensures that these two side effects of “chemo” are lessened.

Although there is still not enough data to be statistically significant, individual studies give legitimate grounds to assume that CBD has anti-carcinogenic properties. Under certain circumstances, these can slow down the growth of cancer. However, more research is needed in order to obtain data from which valid conclusions can be drawn.

The fact that cannabidiol has a positive effect in the context of cancer treatment has been known since the 1970s.

The unfortunate sight of emaciated cancer patients is burnt into the memory of the relatives, friends and doctors involved. This condition is partly the result of the vomiting and nausea associated with chemotherapy and partly the result of the general lack of appetite which affects patients. In addition to the damage done by the cancer, this malnutrition and starvation also damages the body. Patients who took CBD in conjunction with treatment reported that the nausea disappeared, that their appetites returned, and that food tasted good again after taking cannabidiol. This then increased the desire to eat again.

CBD and cancer – studies and applications

Studies into the relationship between CBD and cancer had already given positive indications in terms of increased chances of recovery and improved pain therapy some time ago[1], but it is only recently that a study, carried out by St. George´s University of London, studied the effects of synthetic cannabidiol on tumour growth.

Participants in the study, of which there were 119, were cancer patients who were predominantly affected by metastatic cancer. The participants received synthetic cannabidiol in the form of CBD oil. The concentration of CBD in the oil was five per cent. For more on the details of the study and the actual doses involved, we recommend that you read the source study.

During the application of CBD in the treatment of cancer, three different results were observed. In the case of some patients, there was a decrease in metastases, in some the rate of spread slowed down, and in the third group neither of the first two effects occurred. Side-effects were observed in none of the 119 participants. The researchers concluded that CBD could potentially be used to treat glioblastoma and breast cancer. Further studies similar to this one have already been commissioned.