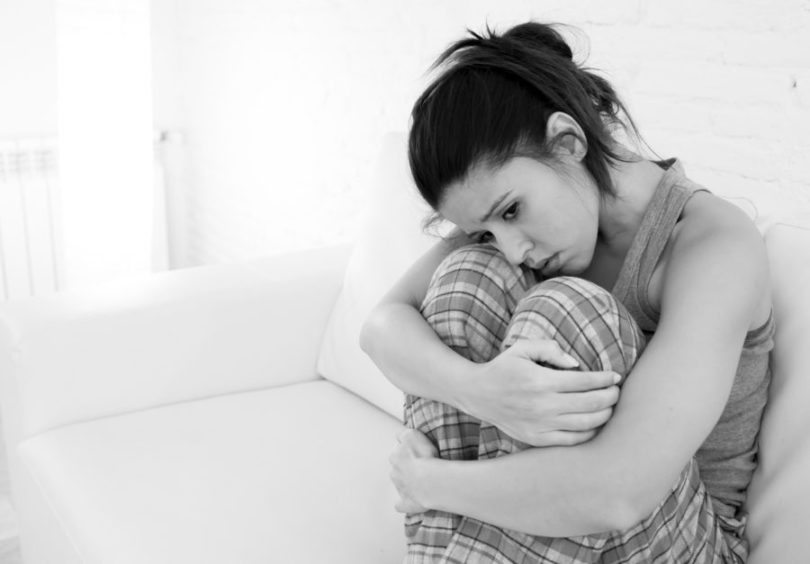 Many women suffer from endometriosis. The disease causes endometrial cells to form in places which they are not supposed to. This can cause the female body to suffer severe pain and become infertile. It can also cause inflammation.

In addition to surgical and drug treatment, the cannabinoid CBD can also help to relieve the symptoms of endometriosis. CBD can have a positive influence on the sensation of pain, counteract inflammation and relax the body and mind in times of mental tension.

Endometriosis is a disease that causes cells that have the characteristics of endometrial cells to settle outside the cavity of the uterus in women.

An uncontrollable proliferation has not been observed so far. Endometriosis is therefore referred to as a benign disease. However, the women affected suffer from abdominal pain in the time between menstrual periods, severe menstrual cramps, pain during sexual intercourse or infertility.

The cell groups that occur outside the uterine cavity in endometriosis are also called endometriosis foci by experts. These are divided into three groups depending on their location:

Unfortunately, the prevalence of endometriosis can currently only be estimated. The reason – in many cases the women affected have no symptoms at all. This means that the disease often remains undetected. However, doctors estimate that around 5,000 new cases of endometriosis occur in the UK every year. Due to the fact that it is not uncommon for women to be free of symptoms at the beginning, an average period of ten years can pass between the onset of the disease and the final diagnosis.

Research is still unclear about the causes of endometriosis. Many experts are currently following the framework of the theory of carry-over or transplantation. As the name suggests, this theory assumes that the cells of the uterine lining are carried from the uterine cavity to another part of the female body. Two different approaches are under discussion. It is assumed that either the circulatory system is the route of transport, or retrograde menstruation begins. The latter means that the menstrual blood flows back through the fallopian tubes into the abdominal cavity. According to current research results, this reverse form of menstruation occurs in 90% of women. It is therefore theoretically possible that the lining of the uterus could enter the abdomen in this way.

Another explanation is the metaplasia theory. The researchers postulate that the endometriosis cells are not transported from other places but are produced on the spot. This development is believed to start from cells that have already developed in the womb from the same embryonic cells as those of the endometrium. This approach could explain why the disease can also occur in men in extremely rare cases.

In addition to the two theories mentioned above, there are additional factors which could at least favour endometriosis. These include:

Endometriosis foci can often lead to weaker or stronger symptoms in affected women. As already briefly mentioned, the disease can also be completely free of symptoms and complaints.

What are the most common complaints and symptoms of endometriosis?

The treatment options for endometriosis usually depend on the extent of the symptoms. If endometriosis does not cause any symptoms or complaints, treatment with medication or surgery is not absolutely necessary.

Endometriosis should always be treated if this disease is associated with unfulfilled childlessness, persistent pain or a resulting malfunction of organ functions (ureter, ovary, intestine, …).

In addition to the forms of drug treatment described in detail below, there are also other options for treating endometriosis.

One of the most important of these is surgery.

Having an endometriosis operation

An endometriosis operation can make sense if either the symptoms are particularly severe or infertility is to be corrected. If so-called chocolate cysts are present in the ovaries, surgery is often unavoidable. If the lining of the uterus has affected the intestines or the bladder, i.e. is obstructing the functioning of these organs, surgery is usually also recommended.

Doctors recommend that if endometriosis affects the organs deep inside the tissue, the operation should be carried out in a clinic with extensive experience in this field.

After endometriosis surgery, all the islands of the uterine lining should, in the best case, be completely removed. The methods used range from laser cutting to electrical current and scalpel. Infected organs such as the fallopian tube may also be removed.

For women who do not wish to have children, whose endometriosis symptoms are extremely severe and who have experienced other treatment methods as ineffective, there is the extreme possibility of a hysterectomy, i.e. a complete removal of the uterus. If the complaints do not end after this, it is possible that the ovaries will also be removed. This procedure deprives the endometriosis foci of the oestrogen needed for growth. After the removal, the patient enters the menopause immediately.

In addition to surgery, the women affected can also use various drugs to treat endometriosis. These can serve different purposes. Painkillers are taken to relieve cramps and pain. In contrast, many women use hormone supplements to slow down the growth of the endometriosis lesions.

Some people take painkillers from the non-steroidal anti-inflammatory drugs category. These include ibuprofen, diclofenac and acetylsalicylic acid. These substances have a soothing effect on severe menstrual pain. There are no scientific studies on their effect in relation to the other pain associated with endometriosis. Potential side effects of anti-inflammatory drugs can include stomach problems, nausea, a blood clotting disorder and, paradoxically, headaches.

Opioids are prescribed by some doctors for the pain associated with endometriosis. Although opioids are powerful painkillers, their effectiveness in endometriosis has not yet been clearly proven. Opioids can also cause side effects like constipation, vomiting, nausea and blood pressure fluctuations. Addiction can also develop if opioids are taken for a long time.

The treatment of endometriosis with hormone preparations is only useful if the patient does not wish to have children. The reason – the hormones usually administered suppress the hormone production in the ovaries. This prevents both menstruation and ovulation.

As explained throughout this text, the pain that endometriosis causes in a woman’s body is very complex. The trigger is often located in the affected organs. In this context, more and more studies are being published about how the endocannabinoid system (ECS) interacts with these and other organs. The ECS involves a number of cannabinoid receptors that are located in the brain and the peripheral nervous system. These receptors control pain, appetite and memory, among other things.

The ECS also influences the body to regulate how we feel pain. This can give hope especially to women who have severe endometriosis pain.

In April 2017 an Israeli team of researchers published a study [1] that included cannabinoid receptors, endometriosis, THC and pain mechanisms as a review study. The researchers concluded from the results that the egg cells in the female body interact with the CB1 and CB2 receptors of the ECS. It can be concluded that ECS and CBD can be effective in endometriosis.

Another study [2] suggests that ECS and endometriosis are linked. Endometriosis was seen as the possible consequence of a deficiency in the ECS. According to the researchers, this would explain the pain that women feel as a result of the disease. They measured low levels of CB1 receptors in the affected women, especially in the affected tissue.

Study situation: How does CBD work in endometriosis?

In short, apart from the studies carried out as part of the ECS research, there are still no studies that explain how CBD works in endometriosis.

However, there are studies that show the link between CBD and a number of symptoms and complaints of endometriosis. These include, for example, that CBD can be effective against pain, inflammation and especially in mental illness. It has been widely accepted that CBD might be an option in pain management.

A study published in the European Journal of Pain shows that CBD applied directly to the skin can relieve inflammation and pain. A parallel study [3] showed that CBD successfully inhibits inflammatory pain.

Inflammation in endometriosis can lead to severe pain. There are different methods for preventing the inflammation from developing in the first place – one of them is CBD. As explained in a detailed report [4] in the Journal of Experimental Medicine, taking CBD can help suppress inflammation. The link between glycine receptors and the CBD is crucial in this context. The receptors are responsible for communicating pain to the brain. CBD prevents not only inflammation but also the transmission of information to the brain. CBD can therefore have an anti-inflammatory and pain-relieving effect in endometriosis.

Many women who have seen countless doctors before the actual diagnosis suffer psychologically as a result of this uncertainty. The problem is that even after the diagnosis, the pain can still put a heavy strain on the psyche. This can also cause sleep disorders, which can seriously interfere with everyday life.

CBD can be a good remedy for this. On the one hand, CBD has a mood-brightening effect and can contribute to a proverbial “coming down” in cases of severe psychological stress. In addition, according to a study by the University of California, sleep disorders can be well controlled by CBD. Researchers from the University of Colorado came to a similar conclusion [5]. Here the test person’s sleep patterns improved when they took CBD.

Which CBD oil works for endometriosis?

The majority of people are advised to take CBD sublingually for endometriosis. The reason is that the disease occurs inside the body. CBD oil is quickly absorbed by the body. Apart from inhalation, this is the fastest way of absorption.

Each CBD oil can be helpful for various symptoms of endometriosis. An individual dosage of CBD oil for endometriosis should be found, especially for the effects against pain, sleep disturbances and to lighten the mood.

If the method of sublingual absorption of CBD oil does not show the desired rapid effect, CBD e-liquids, absorbed via e-cigarettes, are known to be the fastest way.

Endometriosis and pregnancies are a difficult topic. If a woman does not become infertile as a result of the disease, there is the possibility of having a child. A study [6] by Dr L. Sarawat of the Aberdeen Royal Infirmary says that the risk of ectopic pregnancy and miscarriage is higher in women who have endometriosis. Even women who have overcome their endometriosis through treatment revealed problems significantly more often during their pregnancy.