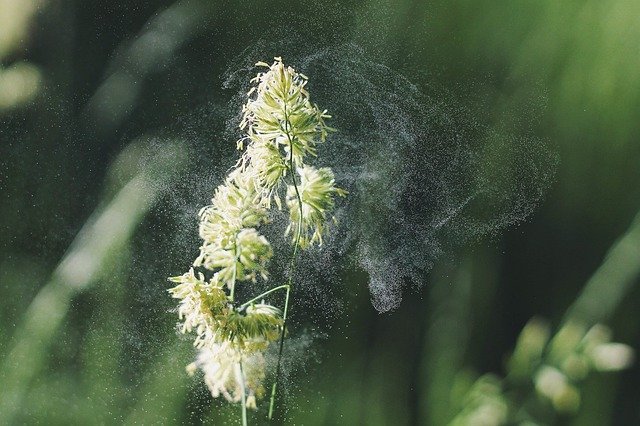 Spring is not a time of joy for millions of people, but hay fever season. The pollen from trees and grasses irritates the nose and eyes during this time. Many sufferers struggle with sometimes very severe breathing difficulties. The reason for all this is that those affected are allergic to pollen protein – the classic pollen allergy.

One possibility of treatment is antihistamines. These are effective but sometimes have considerable side effects. Researchers and especially those affected are now placing great hope in CBD for hay fever. The reason for this is that CBD helps against inflammation, which is one of the main symptoms of hay fever.

The body’s own cannabinoid system, also called the endocannabinoid system (ECS), plays a major role in hay fever. One of the most important functions of the ECS is to ensure the homeostatic balance of the body.

But how does hay fever develop? What are the causes?

Pollen allergy – The main cause of hay fever

Hay fever is considered an allergy. It is triggered by pollen in the air that enters the body through the respiratory tract. The term hay fever is used to describe an inflammation of the nasal mucous membranes caused by this pollen. Doctors call the clinical picture allergic rhinitis or pollinosis.

The name hay fever is causally misleading. The body does not react to hay, but to the plant proteins in the pollen. The familiar superficial symptoms of hay fever in the eyes and nose are only the tip of the iceberg. The pollen proteinsrelease inflammatory messengers (histamines). These lead to a dilation of the blood vessels and cause the swelling of the nasal mucosa. In addition, the messenger substances cause an inflammatory reaction in the immune system.

The body reacts with, for example:

Swelling of the nasal mucosa, sneezing are all symptoms of hay fever

When is hay fever season?

As soon as the spring pollen season begins, so does the hay fever season. A few years ago, hay fever allergy sufferers had respite at least until March, but due to climatic changes, the time has shifted closer and closer to the beginning of the year. Early bloomers like hazel or alder come out in February. The normal flowering time for plants such as willow, poplar, ash, elm, beech, birch or oak is currently between the beginning of March and June.

The milder the winters, the earlier the plants begin to release their pollen into the environment via the wind. In temperate climates, the hay fever season can even start as early as December.

In order to treat hay fever or pollen allergy, doctors resort to different options. Many patients are given medicines that help to relieve the symptoms of hay fever. Antihistamines, for example, fall into this category. These are sold either as tablets or as a nasal spray. Antihistamines weaken or negate the effect of the body’s own messenger substance histamine. The antihistamines block the histamine receptors. In addition to their positive effects, antihistamines also have side effects. These include light-headedness, headaches, dry mouth and drowsiness.

Another form of treatment is hypo-sensitisation. Under medical supervision, the patient’s immune system is gradually accustomed to the pollen proteins that trigger the disease.

The treatment of hay fever is based on three pillars:

1. Avoidance of triggers. This involves allergy sufferers going on an allergen-avoidance programme.

2. Hypo-sensitisation, in which the immune system is accustomed to the allergens.

CBD as an anti-inflammatory

Many mucous membranes in the body become inflamed during hay fever. A study published in March 2014[1] shows how CBD can help with inflammation. CBD was found to reduce inflammation.

A 2011 study [2] suggests that CBD can lower the amount of histamines in the blood. In this regard, CBD acts as an antioxidant for hay fever. These are able to reduce the secretion of mast cells. These cell types are responsible for the release of histamines into the blood.

The symptoms of hay fever do not only occur in the respiratory tract and the eyes. Hay fever can also cause skin rashes. These occur as allergic dermatitis or eczema. A study [3] from 2018 showed that CBD had an anti-inflammatory effect in an experimental application for allergic contact dermatitis.

Another study [1] established a link between CBD and the improvement of itching caused by hay fever. It was found that cannabinoids can also help with many other skin conditions. The researchers suggest, however, that due to the comparatively small number of studies, more attention should be paid to the links between CBD and the itching caused by hay fever.

It is not only the symptoms of hay fever that CBD can address. Most of those affected suffer from lack of sleep, in addition to the actual symptoms. CBD in its various dosage forms has a calming effect on the body. Especially the muscles relax.

A study published by the University of Colorado [2] describes the case of a 10-year-old female patient. Although the cause of the sleep disorder was not an allergic reaction but post-traumatic stress disorder, CBD made it easier for the girl to fall asleep. Even the quality of sleep was improved by CBD.

In a study [3] at the University of Michigan, a large number of study participants were asked whether their sleep problems became less severe after taking CBD. 80% of the participants confirmed that the quality and quantity of sleep improved.

The intake of full-spectrum CBD oils is recommended for allergies. In addition to flavonoids and terpenes, they should also contain phytocannabinoids. According to numerous experience reports, good results have already been achieved with 5% CBD oils.

For hay fever as a form of pollen allergy, experts recommend starting to take CBD before the peak of the flowering season. Pollen count calendars or corresponding apps are a good guide.

The daily dose of CBD oil can be varied depending on the course of the hay fever season. If acute cases occur, doubling the dose can usually be done without hesitation.

Products with cannabidiol for hay fever

Suitable CBD products are available for the various symptoms of hay fever. In addition to the classic CBD oil, the effects on the respiratory tract can certainly be alleviated by inhaling CBD. A quick form of this is CBD e-liquids. These can be easily ingested using vapers (e-cigarettes).

If hay fever causes itchy patches on the skin, there are several options. These include CBD creams or CBD ointments, for example. For the facial area, many people also prefer CBD cosmetics.