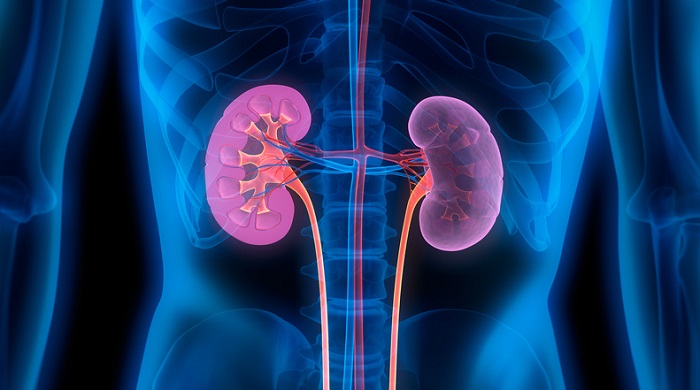 In the (human) body, the two kidneys control not only the water balance and the blood pressure, but also the hormone balance and the acid-base balance. The kidneys also produce the urine that is later excreted. A disease of the kidneys can therefore have a variety of effects on the affected organism. There are many different kidney diseases, but also a large number of ways in which CBD can help alleviate kidney diseases.

The best-known kidney diseases are probably kidney cancer, kidney stones or inflammation of the renal pelvis. Due to the duality of the kidneys (each person naturally has two of them), organisms can cope with the failure or donation of a kidney.

Kidney disease: CBD as an opportunity

CBD can be used for kidney disease for the reason, among others, that CBD has an anti-inflammatory effect. Thus, CBD is said to have a soothing effect on inflammation of the renal pelvis, for example.

CBD for renal insufficiency helps to block the inflammatory cytokines that have a negative effect on the kidney and cause the disease, among other things. If cytokines are already present, CBD can help reduce their activities as they move through the body. But what are the causes and symptoms of kidney disease?

The causes of kidney disease are manifested many times in pathologically damaging changes in the kidney tissue. The causative disease factors are divided by experts into autoimmune processes (glomerulonephritis), intoxications and infections (renal tubules), metabolic systemic diseases or genetic diseases. In addition, it is diagnostically important whether the kidney disease is acute or chronic.

Due to the large number of medically differentiated kidney diseases, an overview of all causes of all diseases subsumed under the term kidney diseases is very extensive and would go beyond the scope here.

One example of this is renal insufficiency. The causes of this kidney disease are mainly:

Symptomatic of renal failure are severely damaged kidneys. Treatments are intended to prevent the progression of the disease. CBD taken for renal insufficiency can have a beneficial effect, as it can, for example, positively intervene on the physical impact of stress with its calming effect and is thus able to have a (preventive) alleviating effect on high blood pressure. CBD is also able to reduce the dosage of other painkillers without diminishing their effect due to its analgesic properties. Thus, an illness caused by too many painkillers can be counteracted.

Here, too, we will stay with the example of kidney insufficiency. The remedies for chronic renal insufficiency can no longer reverse the organ damage caused by the disease. For this reason, the remedies against it start with the prevention or even the delay of the disease’s progression and with the alleviation of its effects and secondary diseases.

Early detection of the disease leaves room for possibilities to intervene positively in the course of the disease. Changing a possibly unhealthy lifestyle can help preventively – this includes reducing excess weight and salt consumption, exercising regularly, quitting smoking and reducing consumption or completely abstaining from alcohol.

Symptoms of many kidney diseases include severe pain, a high temperature and chills. CBD oil for kidney disease can counteract these symptoms, as it can have a regulating, inhibiting or even containing effect, as well as an antiseptic effect.

CBD for kidney diseases and its purely herbal active ingredients are particularly interesting because many chronic kidney diseases require chemical-pharmaceutical medication to be taken over a longer period of time. This puts further strain on the already ailing kidneys. CBD, on the other hand, has no known significant side effects on the kidneys and does not put any further strain on this organ when taken.

Since many kidney diseases occur due to inflammation (e.g. inflammation of the renal pelvis, autoimmune inflammation of the kidney), the potential of CBD is particularly high in kidney diseases of this kind. According to many studies [1], CBD has an anti-inflammatory, as well as a pain-reducing effect. This pain relief as a result of CBD can also help with the removal of kidney stones, for example. The pain that occurs until the surgical removal of the kidney stones can be relieved by taking CBD in the form of CBD oil or also CBD e-liquid (e-cigarette).

For kidneys weakened by disease, it is especially important to have a good blood supply. CBD also stimulates blood circulation in kidney diseases. This means that CBD can also stimulate tissue cell growth in diseased kidneys.

Doctors also attribute many kidney diseases to infections caused by bacteria. One of the best-known of these is bacterial pyelonephritis, or inflammation of the renal pelvis. It is often assumed that CBD has an antibiotic effect, which can also have an inhibitory effect on the growth of bacteria in renal pelvic inflammation. Studies [2] confirm that CBD has antibacterial properties.

Researchers found that the kidneys have their own endocannabinoid system (ECS). Through this system, the body’s own but also externally supplied cannabinoids such as CBD can have a positive effect on the kidneys. This ECS located in the kidneys was confirmed by a study [3] of the University of Turin. The researchers concluded that the ECS plays a role in the development of different diseases such as diabetic nephropathy or progressive chronic kidney disease. From this, the researchers conclude that the ECS in the kidneys can be influenced by CBD in such a way that it can develop a kidney-protective effect.

In 2009, Chinese researchers presented a study [4] in which cisplatin was presented as an effective chemotherapeutic agent. However, according to the researchers, it has a damaging effect on the kidneys. This would limit its clinical use. However, the authors also subjected CBD and its antioxidant effect to a comparative study with cisplatin. A combination of both active substances was used in the experimental mice, which actually reduced oxidative stress. Inflammation levels improved, as did kidney function. The researchers concluded that CBD has a protective function on the kidneys in kidney diseases treated with cisplatin.

When taking products containing cannabinoids, it is possible that they may interact with various medications. If you are taking medication yourself, the use of CBD and other cannabinoids should be discussed with your doctor beforehand.