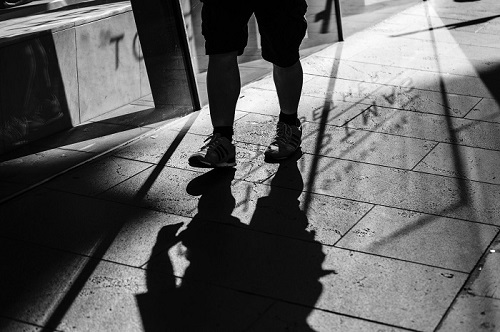 Restless legs syndrome, or RLS for short, is a disease which is characterised by a truly agonising urge to move and can also be manifested by a more than unpleasant tingling and pulling sensation in the legs.

What is striking about restless leg syndrome is that the symptoms only occur when the patient is at rest. As soon as they move, the RLS improves. The syndrome also often occurs during sleep. This can be alleviated by movement, but the sleep phase is nevertheless interrupted. In addition to the urge to move, sufferers often also experience paraesthesia.

Restless leg syndrome is generally classified as a sleep-related movement disorder in the classification system of sleep disorders[1]. Among experts, the terms Willis-Ekbom disease and Wittmaack-Ekbom syndrome are also used for restless leg syndrome. If different reports from sufferers are compared, it can be seen that the disease varies in severity in most cases.

Among other things, due to its sleep-promoting effect, CBD is now increasingly becoming a source of hope for sufferers of restless leg syndrome. CBD is the abbreviation for cannabidiol.

CBD for restless leg syndrome is offered, among other things, in the form of full-spectrum oil. This means that, exclusive of THC, numerous other cannabinoids are present in combination with CBD. These form the frequently observed entourage effect. This means that they work better together than alone.

As of the end of 2020, medical research is of the opinion that the causes of restless legs syndrome have not yet been clearly and definitively clarified. However, researchers have already come so far as to draw conclusions about causes from various evidence.

Dopamine seems to play a remarkable role in restless leg syndrome. It has been discovered that therapy with dopamine (a nerve messenger) can alleviate the symptoms of RLS. This leads the medical community to believe that a dopamine imbalance may be a cause of restless legs.

Researchers are certain that heredity also plays an important role in restless leg syndrome. The reason for this assumption is that more than half of all people affected have had at least one case of RLS in their family. Studies have so far identified six different genes that can have an effect in this case. However, it is not yet completely clear how these genes are connected to the onset of the disease and the corresponding course it takes.

The causes assumed so far are classified as primary causes. However, RLS also occurs as a consequence of other diseases. If this is the case, experts call it secondary restless leg syndrome. The syndrome can occur as a result of hyperthyroidism or hypothyroidism. RLS can also occur as a result of rheumatism, kidney disease or pregnancy. RLS has also been observed as a result of iron deficiency. Inflammation, irritation or damage to a nerve root in the spinal cord can also trigger RLS. It has also been recorded that taking various antidepressants, neuroleptics, and seizure and thyroid medications has resulted in RLS.

The name of the disease alone – restless leg syndrome – names the leading symptom. This is an irrepressible, uncontrollable urge to move. Another symptom of RLS is a lack of sensation in the legs. In exceptional cases, this can also affect the arms. The sensations can be tingling, tearing, pulling or even indeterminate pressure pain. However, some sufferers do not experience these sensations.

The symptoms of RLS described so far have one thing in common – they all have their origin “in the depths” of the legs. Short-term relief is often provided by exercise.

With restless leg syndrome, the circumstances worsen when the affected person is in a state of rest. Going to the cinema, driving or sitting at a desk for long periods of time can cause the sensations. In the situations described, RLS is annoying, but it really becomes bothersome when it is accompanied by the symptom of disturbed sleep. The uncontrolled urge to move disturbs and interrupts the sleep of the patients.

The symptom of periodic leg movements is also called periodic limb movements. If you recognise these involuntary movements in yourself, the chance of suffering from RLS is around 80 percent, according to doctors. The remaining 20 percent is related to other diseases, which are usually associated with signs of old age.

How do conventional remedies for restless leg syndrome work?

The disease known as primary RLS, which is not the result of another disease, cannot be treated causally according to current scientific knowledge. What is possible is to alleviate the symptoms. This can usually improve the patients’ quality of life. In the case of secondary restless leg syndrome, it is certainly possible to cure the disease.

When treating RLS with medication, L-dopa and a decarboxylase inhibitor such as benserazide are often given. People should take this mixture about an hour before going to bed.

If dopamine therapy is chosen to treat restless leg syndrome, it is important to know that it can lead to nausea, drowsiness and circulatory problems. Here, the correct dosage is of decisive importance. At the beginning of such a therapy, the amount of dopamine should be kept as low as possible. Another weakness of dopamine therapy is that it can lead to augmentation. This means that the therapy no longer alleviates the symptoms, but actually increases them. If this happens, doctors often switch patients to a therapy with opiates.

If you are affected by restless leg syndrome, you don’t have to sit idly and let this happen. As a sufferer, you can alleviate the symptoms of the disease by adopting a healthy lifestyle. Regular exercise is important, as are regular sleep rituals, not drinking coffee or alcohol before bedtime, and eating an increasingly iron-rich diet.

The longest resting phase of a body and thus often the starting point of restless leg syndrome is sleep. The involuntary physical movements end the sleep and usually wake up the affected person as well as their life partner. This leads to symptoms of fatigue. In addition, a lack of sleep is the cause of some mental disorders. Researchers at the University of Colorado presented a report[2], in which they explain that taking CBD produced a significant improvement in the quality of sleep in a person who suffered from severe sleep disturbances due to post-traumatic stress disorder (PTSD). This raises the prospect that CBD promotes calmness in the body and thus also improves sleep in restless leg syndrome.

Research on CBD for sleep problems is also being conducted at Michigan State University. The researchers asked a group of people who suffered from sleep problems about their experience with taking CBD. More than 80 percent of the respondents reported that taking CBD led to a high improvement in sleep quality and quantity. The results were published in a study[3].

As mentioned above, inflammation of a nerve root in the spinal cord is suspected of causing RLS. Research is still being carried out here, but if the assumption is confirmed, CBD could also be a helpful support in restless leg syndrome. If inflammation plays a role here, CBD can help thanks to its anti-inflammatory properties. A study[4] on the subject of inflammation in the intestinal area and how CBD works here confirms that CBD can help with chronic inflammation.

The interaction of glycine receptors and CBD in inflammation was described in a study[5] published in an issue of the Journal of Experimental Medicine. The researchers described in their conclusion that CBD is able to inhibit and suppress various inflammations in the human body.

It is otherwise described that various thyroid medications have been located as the starting point for restless leg syndrome. CBD can possibly prevent this, according to a study[6]. The paper, published in 2002, suggests that the endo-cannabinoid system (ECS) and the associated CB1 receptors have an influence on the production of thyroid hormones. If this study is confirmed by further research, CBD could simply be taken instead of some thyroid medications suspected of triggering restless leg syndrome. This would eliminate one possible cause of RLS.

Muscle spasms caused by restless leg syndrome can certainly lead to severe pain. In 2018, a study[7] was published in which CBD oil was taken in drop form to combat pain. Study participants independently reported that swallowing the CBD oil resulted in them experiencing a noticeable reduction in pain. Based on this study, it can be concluded that taking cannabidiol in the form of CBD oils or CBD liquids can lead to noticeable pain relief from a cramping restless leg attack.

Psychological problems can arise if a person is afraid of RLS or it disturbs their sleep. Depression or anxiety disorders can be the result. A few months ago, a study[8]  was published at the University of Leipzig that looked at the effect of taking CBD on anxiety disorders. The 40 test persons were separated into a CBD and a placebo group. The CBD group received CBD oil over a period of 30 days. The study participants in the CBD group showed a noticeable improvement in their anxiety scores. The antagonistic effect on the psychoactivity of THC by taking CBD is also an indication that cannabidiol in its various forms of administration can also alleviate anxiety in RLS.

As already briefly mentioned, in addition to the extremely well-known CBD oil (hemp oil with CBD, cannabis oil), there are a variety of other CBD products that can be taken for restless leg syndrome according to individual taste. These include …

.. and many others. In addition to hemp oil with CBD, CBD capsules, CBD tablets, CBD teas and CBD food are generally taken orally. CBD liquids are inhaled via a vaper, i.e. an e-cigarette. Since people with restless leg syndrome are looking for a quick effect, the vaper is recommended here. Experience reports confirm that this is the fastest way for CBD to be absorbed by the body.

Regardless of which CBD product you use, you should always pay attention to the manufacturer’s instructions as well as your doctor’s instructions when it comes to dosage. Generally speaking, when consuming CBD products, you should make sure to start with small doses. These are then gently increased over time until the desired CBD effect is achieved at an individual point. From this point on, the dose should only be changed if undesirable effects occur. If this is the case, the CBD dosage should be reduced until the unwanted effect has disappeared.

Taking products containing cannabinoids may result in interaction with various medications. If you are already taking medication, the use of CBD and other cannabinoids should be discussed with your doctor beforehand.