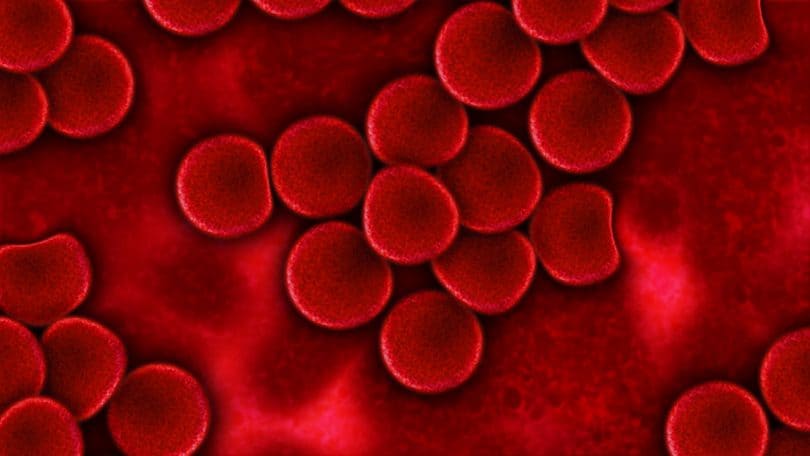 Sickle cell anaemia, also called sickle cell disease or simply sickle cell, is a hereditary disease that manifests itself as a haemoglobin disorder. In this case, the red blood cells, which actually have a fundamentally round shape, become sickle-shaped structures. For hereditary reasons, the disease occurs more frequently in people from the sub-Saharan African region. However, due to hereditary-genetic linkages, sickle cell anaemia now also appears in the Middle East, India and other regions of the globe.

The sickle-shaped red blood cells clump together in the bloodstream and thus clog the blood vessels. This can lead not only to a lack of oxygen, but above all to inflammation. The circulatory disorders, also called sickle cell crises, are not only painful but also can be life-threatening (thromboses).

The lack of blood and oxygen can severely damage various organs such as the eyes, the heart or even the lungs. The symptoms of sickle cell anaemia worsen if the affected person exerts themselves physically or lives at high altitudes (low oxygen partial pressure).

At this point it is important to mention that sickle cell anaemia is not contagious. As already mentioned, the disease is passed on genetically from parents to their children. This also applies to all genetic traits concerning haemoglobin.

A mutation on the gene for the beta chain of haemoglobin causes sickle cell disease. In this disease, pathologically altered protein chains lead to the formation of sickle cell haemoglobin, or HbS for short. This changes the stability of the red blood cells. This is how the genetic disposition gives rise to the clinical picture.

In medical-scientific terms, a mutation on chromosome 11 at the sixth position of the β-globin protein subunit of the red blood pigment replaces the amino acid glutamic acid with valine. The erythrocytes affected in this way become sickle-shaped. This shape creates constrictions in the bloodstream and thus leads to circulatory disorders due to vasoconstriction.

An unusual fact is that sickle cell anaemia occurs frequently in areas with malaria. It is suspected that the disease confers resistance to malaria.

Researchers currently believe that the higher the percentage of haemoglobin (HbF) in the red blood cells, the less likely one is to get sickle cell disease. The drug hydroxyurea is often used to treat sickle cell anaemia in addition to other vascular diseases. This is to reduce vascular occlusions.

For some years, gene therapies have also been researched against sickle cell anaemia. In this case, the disease-causing genes are removed using gene scissors and replaced by healthy ones. Research has not yet achieved a definitive cure, but according to experts [1], steps are being taken here that move from treating the symptoms to combating the causes.

How does cannabidiol work for sickle cell anaemia?

Sickle cell anaemia often means extreme pain episodes for many patients. These have a great impact on the quality of life of those affected. According to a study [2], CBD in sickle cell anaemia has a pain-relieving effect. CBD also helps to reduce the high doses of pharmaceutical painkillers used in the treatment of the disease.

The side effects of other painkillers can therefore be reduced by using CBD against the symptomatic pain of sickle cell anaemia. The pain as a result of the disease also triggers sleep disorders, depression as well as increasing anxiety disorders in many sufferers. CBD can be a helpful remedy due to its calming as well as mood-lifting properties.

CBD for sickle cell anaemia can also be helpful via the endocannabinoid system (ECS). Via the two receptors CB1 and CB2 within the ECS, CBD oil or CBD liquids (e-cigarettes), for example, can have a regulating effect on the release of certain messenger substances in the brain. These messenger substances are usually the so-called dopamine as well as serotonin. These regulate the sensation of pain and happiness. Since CBD favours the release of both, CBD for sickle cell anaemia can additionally positively influence the pain sensation of the affected person via the ECS.

CBD as an anti-inflammatory for sickle cell anaemia

Inflammation can occur due to the blockages in the blood vessels caused by sickle-shaped blood vessels. CBD for sickle cell anaemia can inhibit these inflammations.

The anti-inflammatory properties of CBD, not only for sickle cell anaemia but also for many other conditions and diseases, can be found in many studies, such as this one [4] from 2018.

Pain is a constant companion of those affected by sickle cell anaemia. It often occurs spontaneously and unexpectedly and can jolt patients out of their sleep. Many have great problems falling asleep in a relaxed state because they are afraid of this.

Due to its pain-relieving and even pain-inhibiting properties, coupled with its calming effect, CBD can help those affected by sleep disorders caused by sickle cell anaemia.