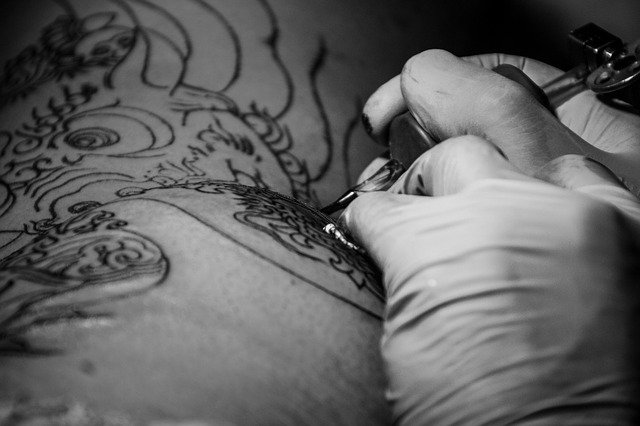 Whether a classic symbol, a meaningful motto for life or the names and birth dates of their own children – many people decide to decorate their body with a tattoo. A wide variety of motifs are applied to the second layer of skin using ink, pigment or another colouring agent via one or more needles. Although the technique is the same, tattoos are now called body modification in humans and identification in animals.

Scientific evidence shows that people have been tattooing themselves for more than 5,300 years. The famous Ötzi, the glacier corpse from the Ötztal Alps, and some mummies from Upper Egypt are among the oldest known tattoo finds. Researchers have dated tattoos of the Scythians, a Scythian equestrian people who lived in the Russian steppe and the Caucasus, to a later period. The peoples of Polynesia, Australia and Micronesia also began early to mark and decorate themselves with tattoos. Tattoos can also directly express tribal affiliations, as is the custom in Japan with the Ainu or the Yakuza. Strictly Christian sects prohibit tattoos by referring to 3,000-year old statements of Moses, which are reproduced in the 3rd book of Moses with the sentence “You shall not make etched scripture on yourself”. Tattoos, however, were very popular with early Christians.

Today anyone can get a tattoo. In Germany, minors are also legally allowed to get “pierced” as long as their parents are present at the actual procedure. In Austria, all persons from the age of 16 may get a tattoo. In the case of minors, however, the legal guardians must give their written consent. In Switzerland, if you are 14 years old and of sound judgement, you may get a tattoo.

The care of each tattoo is especially important shortly after the tattoo has been done. CBD, i.e. cannabidiol, can also play an important role here. The reason is because of the way you get a tattoo. It is not uncommon for the dye to be distributed under the skin with a frequency of 10,000 needle pricks per minute. It is clear that the skin is severely affected and injured in the process. Small wounds develop, which behave in a similar way to abrasions. For this reason, tattoos need care. If this is not done correctly, bacteria or even viruses can enter the body through the tattoo. There they can cause inflammation or even infections. The scab formation can lead to scars. CBD can help here apart from the usual means, both in the care, the aftercare as well as in possible after-effects such as the inflammation and infections mentioned.

CBD is one of over 100 cannabinoids of the hemp plant. Obtained by various methods, it can be purchased as CBD cream, CBD ointment, CBD oil or in various other dosage forms. THC is also an ingredient of hemp. However, unlike THC, CBD is legal. There are generally three reasons for this. THC has a psychoactive effect, whereas CBD is not psychoactive. CBD cannot cause intoxication and does not cause dependency. There are legal CBD products in Germany that contain THC. However, in Germany and throughout the European Union, the THC content may not exceed 0.2%. In Switzerland this limit is 1 %.

How do you care for freshly pierced tattoos?

You have done it. The needles in the tattoo shop have fallen silent and under your own skin you can see the desired motif. Now it is time to deal with healing and care. The first thing that should happen is that the tattoo artist applies the affected skin area with a disinfecting ointment. As explained in the chapter on studies, a CBD ointment or cream is also good for this purpose. CBD oil applied to the skin can also have an effect here. After the surface treatment, the tattoo should be covered with a sterile, air-permeable foil. A bandage completes the first treatment and tattoo care.

After removing the foil and the bandage (after eight hours at the earliest) the tattoo has to be cared for. Experts recommend moist wound healing. This means that the wound should be cleaned and creamed at regular intervals.

You should approach the wound with clean and disinfected hands and clean it with lukewarm water and a soap that is at best free of perfume. It is advisable to dab everything dry afterwards with a lint-free cloth only. Afterwards a thin layer of healing ointment or a CBD cream (also CBD ointment or CBD balm) should be applied for tattoo care. With the corresponding creams and ointments, you should pay attention to a low-fat content. The reason – too much fat can soften the skin and thus wash out the tattoo colour.

The cleaning should be repeated every three hours at the beginning. This leads to an optimal healing process.

Depending on the size, a tattoo should be completely healed in a period of three weeks to three months. In addition to the natural and endogenous wound healing, this can be supported by using different tattoo care products.

Nourishing tattoo creams contain active ingredients that soothe and cool the injured and thus irritated skin. Most tattoo creams penetrate into the lower skin layers and can contribute to a faster regeneration.

The further tasks of tattoo care creams are to prevent inflammation and irritation. In addition, many of them also supply the skin with nutrients. The aim is that various signs of inflammation disappear and that the skin feels smooth and supple again.

If the tattoo becomes inflamed, tattoo care creams with an antibiotic effect should be used. If swelling, redness or other skin irritations occur despite the use of a tattoo cream, tattoo specialists always advise you to see a doctor.

The following sentences should be understood as short general instructions for tattoo care. You should never scratch your fresh tattoo. This can cause scars. Keeping dirt and dust away can prevent infections. You should wear lint-free clothes. UV light damages irritated skin, so direct sunlight and visits to a solarium should be avoided. Sauna visits and bathing in chlorinated water should also be avoided completely at the beginning.

CBD can help with wound healing and skin care. CBD can alleviate pain, impact on germs and other organic foreign substances through its antibacterial properties and have an anti-inflammatory effect. All these possibilities can be helpful regarding the stinging when having a tattoo. The calming effect of CBD on tattoos can also help a person to go to the tattoo studio with less fear and to alleviate the fear of the needles piercing thousands of times. A CBD cream, a CBD ointment or a CBD balm can have beneficial properties especially for freshly pierced tattoos.

According to one study [1], CBD can also act as an antioxidant. It can thus protect cells from free radicals and oxidative damage. In the context of tattoos, this can mean two things. On the one hand, CBD can reduce skin damage and on the other hand, the dye can be distributed more evenly under the skin.

In most cases, the piercing of the tattoo is accompanied by pain. For some people, this can be the kick of tattooing, but for others the pain prevents them from wanting a tattoo. Even after the actual piercing, the pain can still persist. However, experts advise against using acetylsalicylic acid-based painkillers before a tattoo, as they have blood-thinning properties. This would mean that the freshly pierced tattoos would bleed considerably more than usual. Instead of painkillers, many people now resort to CBD. In a study[2]  on multiple sclerosis, published in 2018, it was found that those test persons who took CBD perceived a more than remarkable reduction in the sensation of pain.

A study[3]  published in the European Journal of Pain shows that CBD can help with pain during the piercing as well as during the tattoo care phase. In this study, patients suffering from severe pain due to arthritis were given CBD. After a few days, the patients reported a very large reduction in both acute and chronic pain.

If there are problems with a tattoo, these often manifest themselves as inflammations. In an article[4] in the Journal of Experimental Medicine, researchers from China reported that because of the effect of CBD on the glycine receptors, anti-inflammatory effects were seen in the participants in the study described.

If infections occur during tattooing, CBD can help thanks to its effect, which can be compared to antibiotics. A study[6] reveals that CBD can be used as an alternative to an antibiotic. The researchers found that all strains of bacteria were killed by CBD during the research. According to the experts, this also applied to those bacteria that are considered highly resistant to antibiotics.

Another study[7] shows that CBD is even capable of affecting strains of MRSA, i.e. those strains of bacteria on which most antibiotics literally struggle to have an impact. Furthermore, the study showed that CBD already develops strong antibacterial properties yet can act even more potently with various other strains from the cannabinoid family. This is attributed to the entourage effect of the cannabis ingredients.

In order that a fear of needles, dye under the skin or unfounded ideas of unhygienic tattoo studios are not an inhibition threshold, CBD can be used to calm a person down and reduce fears before a visit. A study[8]  was recently published at the University of Leipzig, which looked at the effect of CBD in an anxiety disorder. The randomised study divided the test persons into a placebo and a CBD group. The participants all suffered from a particular social phobia. The anxiety level was measured in each subject at the beginning. This was repeated after exactly 30 days. In the CBD group, with members who participated until the end, the anxiety level dropped considerably due to the use of CBD. The conclusion can be drawn that if someone wishes to get a tattoo, but cannot overcome their fear of needles, for example, they can reduce this fear a few days or weeks beforehand by regularly taking CBD.

CBD in tattoo care should always be used with caution. Even though no side effects are known so far, CBD experts advise using both internally and externally applied CBD in a small dose first.

The principle is that this small amount should be increased until the desired effect is achieved. Different amounts of CBD can have the desired effect on different people. You should consult a doctor, an experienced tattoo artist or the manufacturer’s instructions beforehand.

CBD creams, CBD ointments and CBD balms have been specially developed for external application on the skin. These can play an important role in tattoo care. CBD-containing tattoo creams, for example, can treat itchy, irritated and swollen skin areas well. CBD used in tattoo care can have a soothing effect on the skin and provide long-lasting moisture through these creams, ointments and balms. The effect of these forms of CBD is also that the skin heals faster on the surface and thus the colour intensity of the tattoos is more strongly preserved.

Other CBD products used for tattoos

In particular to alleviate pain and trigger calming effects, fast-acting CBD products can be used for tattoos. For example, you can use …