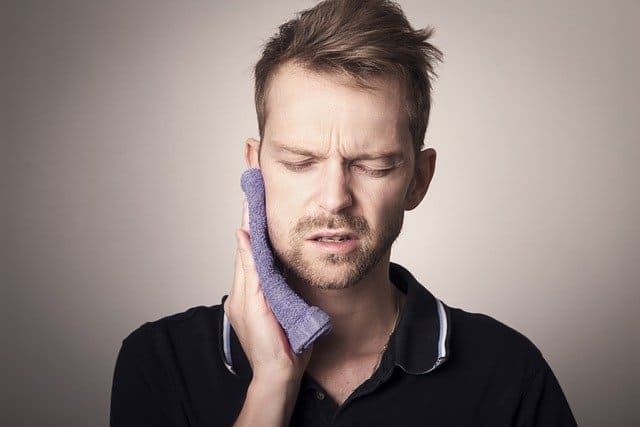 Strong throbbing, reddened cheeks and major problems opening your mouth – these are the potential effects of toothache. When even a cold breath of air caressing a tooth causes excruciating pain, a visit to the dentist cannot be delayed. A diseased tooth can be the cause of the pain, but other things can also be the cause of toothache.

In addition to a broken or diseased tooth, inflammation of the sinuses or even a heart attack can be the cause of a toothache.

Tooth decay, inflammation and toothache: CBD oil as an opportunity

Toothache, caries or odontalgia are usually perceived as truly unbearable when they occur intensively and, above all, continuously. If painful inflammations originate, for example, in the periodontium, experts speak of an odontogenic infection.

Since toothache can also be triggered by pain in other parts of the body, for example, inflammation, migraine or pain-sensitive teeth, many sufferers have discovered CBD for themselves. Cannabidiol, CBD for short, is one of more than 100 ingredients of the hemp plant. Besides CBD, the best-known cannabinoid is probably tetrahydrocannabinol, which is also known as THC. THC cannot be purchased legally within the entire EU and also in UK (except in exceptional medical cases). CBD, on the other hand, can be bought legally without restrictions. Trade in CBD products within the European Union and UK is permitted if the THC content is below the limit of 0.2%. CBD is not psychoactive and is therefore often used as an antidote to psychoactive THC. Furthermore, CBD is not addictive and does not cause intoxication when consumed.

CBD products have an analgesic and anti-inflammatory effect on toothache.

Dentists know that most cases of toothache are directly caused by the teeth. However, other causes can also occur – health problems or diseases that radiate to the teeth from other parts of the body.

If the toothache is triggered by dental problems, there can actually be a long list of triggers for it. In general, it can be said that many of the dental problems that now follow are based on inadequate oral hygiene.

Tooth decay (caries) is triggered by bacteria that settle on the thin biofilm called plaque. Their metabolic product from the decomposition of sugar is an acid that attacks the sensitive tooth enamel. Without regular brushing, the bacteria can penetrate the teeth and even reach the dental pulp. There they can cause painful irritation. At this point at the latest, you should avoid sour, sweet, hot and cold foods, because most affected teeth react to them with additional pain.

Tooth root inflammation is often the result of caries not being discovered and treated, or being discovered and treated too late. The bacteria then trigger an inflammation of the dental pulp, a so-called pulpitis. This can penetrate to the tooth nerve and damage it, causing severe pain. In addition to the damage caused by the inflammation, the swollen pulp can also cause problems if it presses on the nerve. The result of a tooth root inflammation is permanent, pulsating toothache. If nothing is done at this stage, the nerve can die. Although this usually ends the pain, the inflammation is still present and can spread to the jawbone.

In addition to the causes mentioned so far, the following can also lead to toothache:

In addition to the obvious toothache, there are other signs that something is wrong with the mouth and its chewing tools. For example, even easy-to-tolerate toothaches can lead to swelling or inflammatory oedema. These are usually located directly on or near the source of the pain. From the outside, you can see the typical thick cheek.

Throbbing toothache is usually caused by increased blood flow. For most patients, cooling helps, for some others, heat provides relief.

Conventional therapies: What to use for toothache

Toothache relief usually depends on the cause of the toothache. If you are suffering from tooth decay, dentists will simply drill out the affected area. The resulting hole is then closed with a filling.

If problems in the root of the tooth or in the jawbone are the cause of the toothache, root canal treatment should usually help. Opening the tooth is the first step in relieving the pain, as this relieves the pressure.

Abscesses are also treated in this way. If you suffer from gingivitis, dentists usually clean the gum pockets. Antibiotics can also help.

And of course, for good reason, many sufferers of acute toothache use painkillers as a first aid measure. However, dentists advise against painkillers containing acetylsalicylic acid. These can inhibit pain, but also blood clotting. This can lead to increased bleeding during subsequent dental treatment. This can be prevented by using paracetamol, for example.

In addition to visiting the dentist, the following home remedies can also help with toothache:

For those affected by toothache, the relief of this pain is naturally in the foreground – also in the context of taking CBD products. A 2018 study [1] looked at the effect of CBD when taken in droplet form and how it combats pain. The participating pain patients stated across the board that there was a significantly noticeable reduction in pain after taking CBD.

The results of the above-mentioned study are supported by another study [2], published in the European Journal of Pain. In this study, patients whose pain was due to arthritis were treated with CBD. The patients unanimously reported that after taking CBD, there was a significant improvement in the sensation of pain.

According to a report [3] in the Journal of Experimental Medicine, CBD is said to be helpful against both pain and inflammation. The researchers report that CBD is able to suppress not only pain but also inflammation. According to the experts, CBD has an effect on the so-called glycine receptors. These are responsible in the body for telling the brain that the body is experiencing pain. However, if these receptors are inhibited by CBD, the existing pain can be alleviated.

The relief of inflammation by CBD is the subject of another study [4]. From this study, the researchers conclude that CBD has an effect on the CB1 and CB2 receptors. Thus, the cannabidiol can alleviate inflammatory reactions and thus suppress subsequent symptoms of disease and pain.

The anti-inflammatory properties of CBD can have quite an alleviating effect on certain triggers of toothache such as periodontitis, gingivitis and inflammation of the tooth roots.

Since tooth decay is triggered by bacteria, antibiotics can certainly help here. However, there is the restriction that they should not be used excessively. Thus, an alternative to antibiotics with similar mechanisms of action may help. CBD for toothache could be this alternative.

The fact that cannabis has antibacterial properties has been known for quite some time. Numerous ingredients of hemp can have an antibacterial effect, especially in combination. Via the entourage effect, CBD, CBC (cannabichorm), CBG (cannabigerol), CBN (cannabinol) and even THC can be used together against bacteria. This special, antibacterial mode of action of cannabinoids was also clarified in a study published in 2008 [5]. Here it was shown that CBD, together with the other legal cannabinoids, was able to fight germs via full-spectrum products, although antibiotic resistance had already occurred. An additionally pleasing result of this study was also that it could be shown that CBD can even help against MRSA bacterial strains, where the vast majority of normal antibiotics fail. This means that teeth that are already affected by bacteria and are therefore painful can be helped by the antibiotic effect of CBD.

How do products with CBD work for toothache?

The research field of CBD for toothache in its specialisation is still a relatively new one. But how do the different CBD products work for toothache?

CBD oil can certainly help to alleviate pain and, above all, inhibit inflammation in the case of toothache, if studies from other disciplines on similar symptoms are taken into account. It has also been promisingly tested in a number of studies as an alternative to antibiotics.

Dosing CBD in the context of dental health

If you usually start with a low dose when consuming CBD and slowly work up to the hoped-for effect, this length of time is usually not desirable in the case of toothache. Therefore, you should seek the advice of the treating dentist.

However, if the pain is at a tolerable level, you can start with a small dose and gradually increase it until the desired toothache-relieving effect occurs.