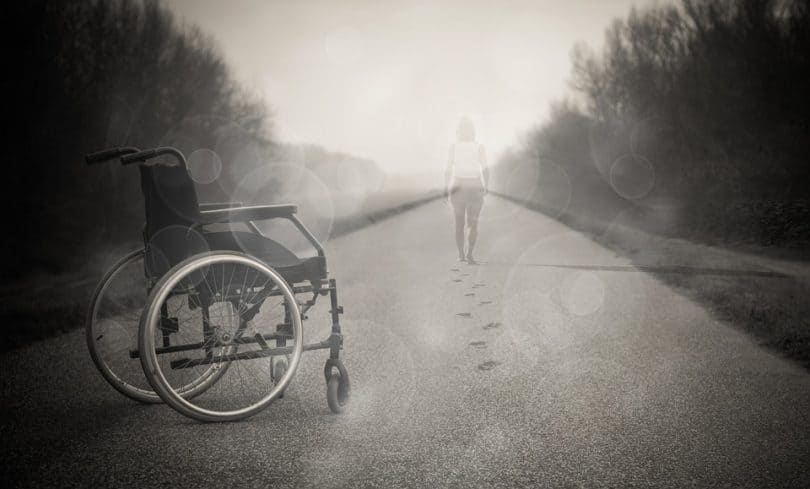 The inconspicuous abbreviation MS stands for a disease of the central nervous system, and a diagnosis which sends a shiver down the spine. It is precisely here, in the spinal cord, but also in the brain, that this chronic inflammatory disease destroys portions, large and small, of the nerve fibres present. The tricky thing is that, in the case of multiple sclerosis, it is the body’s own immune system cells that cause this damage.

MS is known as the disease of a thousand faces, both by laypeople and by experts. The reason for this is that the disease itself, as well as its symptoms, develop differently in different patients.

The fact that multiple sclerosis is a chronic inflammatory disease, the symptoms of which include severe pain, means that CBD can help in the case of MS.

Because the clinical picture of multiple sclerosis is so diverse, the causes of this autoimmune disease are not yet fully understood. What is clear is that MS is more common amongst young people and that it is also more common in women than it is in men. It is estimated that around 2.5 million people are affected around the world.

What is known about the causes of MS is this: Both the brain and the spinal cord contain a large number of nerve fibres, which are sheathed by an insulating layer of fats and proteins. With MS, these insulation layers become inflamed and get destroyed. This damage means that the nerve cells can no longer communicate with each other well. This leads to the typical symptoms of MS – such as visual disturbances, sensory disturbances, muscle weakness and fatigue.

How the medicines used to treat multiple sclerosis work

The medications currently used for multiple sclerosis can prevent the sometimes drastic relapses of the disease which can occur. Others slow down the steady progression of MS. None of the drugs produced in pharmaceutical laboratories, however, are effective against all manifestations of the disease.

Some MS medication targets the immune system. As it is the body’s own systems of defence (phagocytes) which attack the insulating layer around the neural pathways during inflammation, these are the target of this kind of medication. Thus, it is not the inflammation itself that is countered, but instead those parts of the immune system which attack the insulating layer. Various substances, for example, prevent the proliferation of immune cells, while others suppress the “swarming” of these cells. One branch of ongoing MS research is investigating the hopeful prospect that CBD, with its anti-inflammatory properties, may, in this case, actually fight the cause, rather than the “tools” used to carry out the subsequent destruction.

CBD and MS (multiple sclerosis) – What are the effects of cannabidiol?

First of all – researchers have not yet discovered a substance that can actually cure MS. CBD can also not help in this regard. Cannabidiol is an active substance derived from the hemp plant which, in contrast to THC does not have a psychoactive effect, does not cause intoxication and may therefore be freely and legally bought and sold in the UK.

Two of the properties of CBD are decisive in ensuring that this active substance is a ray of hope for MS sufferers. One reason is that CBD has an anti-inflammatory effect on MS, i.e. it addresses the cause. The other reason is that cannabidiol also alleviates the symptom of pain,  which many of those affected often suffer from greatly and on a continuous basis. It does this by blocking the corresponding receptors in the brain, soothing and suppressing the symptoms.

Often, multiple sclerosis leads not only to physical ailments, but also to psychological ones. States of anxiety and depression are unfortunately all too often regarded as “mere side effects”. Whilst CBD does not cause intoxication, in contrast to THC, it does affect the hormone balance in a way that lightens one’s mood. CBD is therefore particularly effective in the case of multiple sclerosis as it significantly alleviates the psychological strain on the mind, as well as the physical strain on the body.

The specialist literature repeatedly gives examples of the positive effects of CBD when it comes to MS fatigue attacks. It has been reported that taking CBD, especially during the morning hours, has the effect of mitigating these types of attack. These morning attacks can affect both the ability to sleep through the night and the ability to fall asleep in the first place (fear of being woken by pain). The pain-relieving properties of CBD provide relief, particularly during the phase of falling asleep, when they help those with MS to glide, gently and safely, into the realm of dreams.

At this point, it is important to emphasise the fact that there is a reason why MS is known as the “disease of a thousand faces”. This fact does not, according to current knowledge, make treatment on one’s own initiative with CBD a risk, but the effects of this hemp product on the person in question can vary considerably. Nevertheless, even doctors, with whom you should always consult beforehand, usually recommend giving CBD a try simply because there are barely any documented side effects.

In the case of multiple sclerosis, a basic distinction is made between two different courses which the disease can take. In the case of primary progressive MS, the first symptoms are expressed right at the beginning, gradually intensifying over the course of the disease’s progression. No extreme attacks occur in these cases. The other extreme of MS is the relapsing-remitting form. Instead of the predictability of a constant rate of deterioration, it consists of unpredictable flare-ups. To begin with, the effects of the relapses usually recede back to normal. During the later course of the disease, however, more and more damage persists on a permanent basis.

Outlook and studies of CBD and MS

The effects of using CBD for MS (multiple sclerosis) have been documented in a number of renowned studies. One of the best-known studies[1] dealt with the efficacy of CBD in the form of a spray. It was found that, after taking CBD, MS patients complained less of severe pain than did the control group, who only received placebos.

However, research has not focussed solely on the effects of CBD following the outbreak of multiple sclerosis. A study has also demonstrated the effectiveness of the consumption of CBD in preventing MS[2]. The improvement was particularly noticeable in in the change in the body’s own reaction to inflammation.

Elizabeth Limbach wrote a very personal report of her experiences. In her book “Cannabis saved my life”, the MS patient describes in vivid words how the use of cannabidiol reduced her devastating symptoms and gave her back the freedom of movement she had been missing for so long.