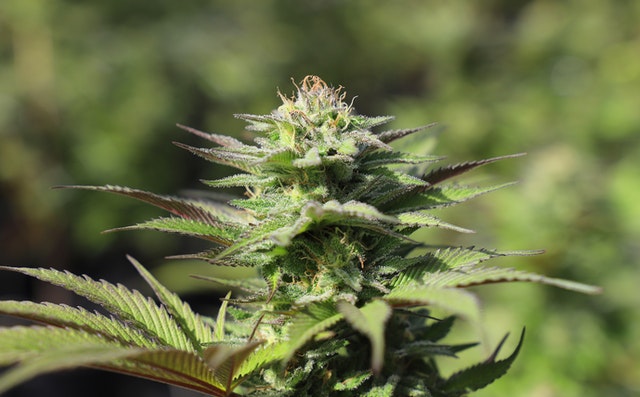 Over 100 ingredients have been identified in the cannabis plant by scientists. Their properties range from pain-relieving to anti-inflammatory to gentle mood-lifting. One of the still relatively unknown cannabis ingredients is tetrahydrocannabivarin, or THCV for short. Not as well-known as CBD or THC, researchers currently assume that THCV can trigger an activating and energetic high.

Unlike CBD, THCV is suspected of having a psychoactive effect. Even if this is not yet the case, the legislator could classify THCV as a narcotic due to its intoxicating effect and psychoactive reactions.

However, according to current findings, THCV can also limit the effect of THC. According to some researchers, THCV also has the potential to help treat diseases such as Parkinson’s or diabetes.

THCV is one of the cannabis compounds that has received a little less attention compared to other cannabinoids such as CBD or THC. While most cannabinoids (THC, CBD, …) are formed by the cannabis plant from cannabigerolic acid, or CBGa for short, THCV is a different story.

Not every cannabis variety contains the same amount of THCV. A study [1] from 2004 shows that THCV is contained in all cannabis varieties. The highest THCV potential in terms of quantity is found in an indica variety growing wild in Southeast Asia and South Africa.

In most hemp varieties grown and harvested for medicinal purposes, the THCV content is generally low. African sativa varieties, on the other hand, usually have a high THCV content.

The effect of tetrahydrocannabivarin (THCV)

Despite a certain level of unknowns with regard to THCV, researchers, scientists as well as medical doctors have already looked into the substance in studies. Despite a similar chemical composition, THCV has an inhibitory effect on many of the negative effects of THC. This is especially true for the intensity as well in the case of experiencing great anxiety. This type of effect of THCV is described in a study [2] from 2015.

Users of THCV have reported that they experienced a stronger euphoria than with THC use, but that it would last for a shorter period of time.

That THCV could have not inconsiderable potential for medical application is shown by another study [3]. Here, THCV was tested on mice. In the animals it was found that the intake of THCV can change the metabolism and positively influence the symptoms of diabetes in the short and long term. As a side effect, it was shown that glucose intolerance was reduced in the test subjects and insulin sensitivity was improved. The authors of the study were particularly surprised that THCV seemed to restore the effectiveness of insulin in those subjects who had previously shown resistance to it.

Use for weight loss

Nowadays, there are few people who are happy with their weight. Some want to lose weight whilst others want to gain weight. According to promising research results, THCV can specifically help with weight loss. Researchers are currently investigating how and why THCV can regulate weight loss and appetite control. As an inhibitor of THC, THCV can inhibit the cravings triggered by THC. Researchers are currently working on a way to extract an appetite suppressant from THCV, which could also help in the treatment of diabetes.

Not only researchers, but also consumers report a very specific property of THCV that runs counter to THC in its effect. THCV does not have a depressant effect, but an invigorating one. Instead of the slightly intoxicating effect of THC, THCV also has a euphoric effect, but the mind becomes clear and focused. It also mitigates the opposite effects of THC use.

Use for essential tremor & epilepsy

THCV can also have positive effects as an adjunct in the treatment of essential tremor. Taking THCV when suffering from Parkinson’s tremor has been shown to be helpful, as one study [4] found. This effect is attributed to THCV because it has a neuroprotective effect. Thus, there is even the possibility that THCV could be used for multiple sclerosis.

Researchers at the University of Reading in the UK investigated the effect of THCV and its anticonvulsant properties. In the published study [5], the authors said that, similar to CBD, THCV was able to reduce the frequency of epileptic seizures. In addition, the researchers went on to say that THCV could well have a possible therapeutic effect in the treatment of pathophysiological states of hyperexcitability.

From Scotland comes equally promising news. At the University of Aberdeen, scientists investigated how THCV affects the activation of 5-HT1A receptors. The aim was to find out whether THCV has an antipsychotic effect. The results of the study [6] show that THCV can improve 5-HT1A receptor activation. Dependent on this activation, according to the researchers, are also some of the THCV’s inherent antipsychotic effects. In the conclusion, the researchers state that the results should be cause for hope that THCV may be able to alleviate some of the negative symptoms of schizophrenia.

One effect of THCV that has not yet been 100% proven is that it supresses anxiety. The key here is that unlike other anxiety suppressants, it does not additionally suppress the other emotions.

Side effects of THCV

One side effect is indirect, but it depends on the form in which the THCV is taken. It is possible to smoke THCV. This is usually done in combination with tobacco. Those who consume THCV with tobacco should therefore be aware of the associated health risks.

Ingested in high doses, THCV binds to the CB1 receptor. In doing so, it can cause pronounced states of intoxication. No other side effects are known so far. However, research on this is still in its infancy.

What is the difference between THCV and CBD?

CBD is not psychoactive, does not cause intoxication and is not addictive. According to current knowledge, THCV is not addictive either. As already described, THCV triggers violent, but short intoxicating states.

Buying THCV – which products with THCV are available?

Since THCV has only been studied by researchers for a comparatively short time, the market introduction of THCV products occurred fairly recently. The first products came from the USA. There, so-called vape pens with a distillate that has a high THCV content are offered for sale.

Due to the fact that in the USA the trade with THC is legal in various states, these vape pens can often contain a high proportion of additional THC. The manufacturers even speak of a content between 25 and 30 %. Therefore, if one should import THCV products from the USA were imported to Europe, it would be necessary to obtain information on its legality. In the EU and UK, only cannabis products with a THC content of less than 0.2 % are allowed.

In order to convey the pure effect and unadulterated taste, some manufacturers also offer THCV isolates. Here, too, the USA is a pioneer. It is still unclear whether the US products will find their way into the EU and UK. The legal status of THCV is still in a kind of grey area. THCV has not yet been explicitly mentioned by name in the Narcotics Act.