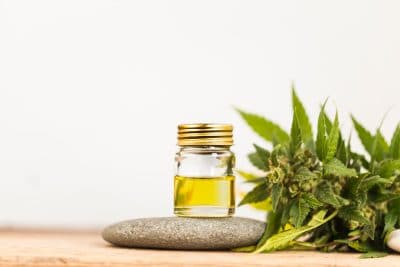 CBD (cannabidiol) is a non-psychoactive, i.e. non-intoxicating constituent of the hemp plant. In recent years, numerous positive effects of CBD on the human body have been identified, including pain relieving and anti-inflammatory properties in particular. For this reason, this phytochemical is becoming increasingly important as an alternative medicine and food supplement.

Hemp: The natural origins of cannabidiol

Hemp has been used as medicine for over 5,000 years. This useful and ornamental plant can be seen as a natural laboratory and some 500 constituent compounds have now been identified. For pharmaceutical purposes, the phytocannabinoids, which also include CBD, are of particular interest. CBD occurs mainly in the upper third of the hemp plant, as well as in the flowers. Biochemically, it is an antagonist of tetrahydrocannabinol (THC), the controversial drug with the world-wide reputation.

Specifically, CBD is a component of the essential oils which are found in hemp. These oils are produced in the hairs of female plants and are mainly stored in the flowers. In order to meet increasing demand, increase the CBD content and improve quality, special breeds are being cultivated. By means of genetic changes, efforts are being made to reduce the THC content as much as possible. In the case of some breeds, this is well below 0.2% and thus below the maximum level which is permitted in the European Union.

The extraction of CBD from the hemp plant

There are various different possibilities when it comes to extracting CBD from hemp plants. The most commonly used methods include the following:

It must be taken into account that the therapeutically effective CBD in the plant is initially present in inactive form as a carboxylic acid, in this specific case CBDa. The A at the end stands for acid. Hemp itself thus always produces just the precursor of what we use as products. This applies to CBD as well as to the more controversial THC. In order to have an effective product in your hands at the end of all of this, two decisive steps have to take place:

Alcohol extraction  makes use of the fact that cannabidiol can easily be dissolved out of the hemp plant using alcohol. This method is usually used to produce pure CBD (CBD isolate). This is largely free of other cannabinoids such as THC.

Roughly speaking, CO2 extraction is carried out as follows: the first step consists of chopping the hemp up and heating it up to 150 °C. Subsequently, extremely cold liquid carbon dioxide is added under high pressure, whereby the individual plant constituents separate and the CBDA is converted to CBD. In a final step, the CBD is separated from the other constituent substances. This process is the one which is most commonly used today, for example in the production of full spectrum extracts. These are extracts which contain numerous other cannabinoids in addition to CBD.

The effects of CBD

If the active ingredient enters the body in the form of CBD oil or CBD capsules, for example, the circulation of blood distributes it through the body, where its effects then take place. Its mechanisms of action are so varied that, whilst CBD does not replace conventional medical treatment, it functions as a useful complement in many cases.

The effects of CBD  are difficult to delimit. Rather, the phytochemical produces numerous effects in the body. CBD has been shown to have the following effects:

Thus, to an extent, it works in precisely the opposite manner to THC. Although many cannabis users report calming effects following consumption – an effect which is identical to that of CBD – the situation is quite different when it comes to hunger: THC stimulates hunger, whilst CBD suppresses the appetite. A tumour-inhibiting effect has even been demonstrated, however this treatment can only be carried out in close consultation with a doctor and is currently the subject of intensive research.

Having entered the body through the bloodstream, CBD interacts with various receptors in the brain and the immune system. Researchers have found that CBD has more than ten different mechanisms of action. It intervenes in various signalling pathways and thereby exerts a positive effect on the metabolism. For comparison: THC influences only two receptors, but has a strong intoxicating effect. CBD lacks precisely these psychoactive and potentially addictive effects, and this is what makes it so valuable in alternative medicine. The totality of receptors which are affected by CBD are referred to as the endocannabinoid system.

The areas of application of CBD products

CBD not only affects the brain – it also affects all sorts of other parts of the body. This is because CBD receptors are distributed throughout the organism. Areas of application and indications are thus correspondingly diverse. Amongst the diseases where CBD has already been successfully used to support treatment are the following:

In addition, studies are being conducted to investigate the supportive use of CBD in chronic inflammatory bowel diseases such as Crohn’s disease, cancer pain and many other problems.

The recommended CBD dose depends on many factors, such as height, age, weight and medical indication. If it is just a matter of feeling less nervous or more energetic, or if you are combatting minor sleep disorders, very small doses are usually possible. This also applies if other medications (e.g. painkillers, sedatives or similar) are to be reduced under medical supervision. Recommended doses vary from person to person. You would be well advised to consult your doctor or pharmacist on an individual basis. A common initial dose is one to two drops under the tongue. Besides CBD oil there are all sorts of alternative modes of delivery, such as

Pharmacies and retailers offer CBD in the form of soft capsules and hard capsules. In the case of the soft capsules, the oil is only released in the stomach once the capsule starts to be digested. The oil therefore does not come into contact with the tongue’s taste buds. The advantages of CBD capsules are the possibility of providing exact dosages, the neutral flavour, the good levels of tolerability and the ease of consuming the capsules wherever you are. Some users do not like the fact that there is a relatively long delay before the effects take hold. In addition to this, some people find it difficult to swallow larger capsules. And of course a sip of some kind of liquid is needed when swallowing the CBD capsules.

Oil was the first form in which cannabidiol become available on the market as a medicine. To date, CBD oil is the most frequently sold preparation for this group of active substances in the UK. Individual oil products differ primarily in the concentration of the active ingredient and the method of production. Since CBD is very fat soluble, vegetable oils are used as the carrier substance. The user takes it by dripping the oil on or under the tongue and then swallowing it. In this case, dosage is also very simple and the CBD can be taken without having to drink anything. Nevertheless, the slight bitterness is not to everyone’s taste. It can take up to ten minutes for this taste to go away.

A relatively new arrival on the market are the numerous products in the CBD cosmetics sector. However, they are now increasingly available on the high street and in online shops and are for use against such problems as

Most manufacturers recommend rubbing the product in twice a day. These products include CBD cream, CBD ointment or salve and CBD massage oils.

Overall, CBD is considered to be highly tolerable, with few side effects. Although cannabis has been popular as a medicinal, ornamental and useful plant for thousands of years, conventional medicine has only recently shown an interest in cannabis products. It is because of this that there are still no studies which have investigated possible long-term side effects. However, looking at people’s experiences in general, negative experiences with this natural substance are rarely reported. Occasionally, users mention tiredness, dizziness and nausea. In general, poor tolerability is always a risk if the products are contaminated or not manufactured to high standards of purity. Due to the product’s broad spectrum of properties, it is also possible that the user may experience effects which do not correspond to those originally intended. Strictly speaking, however, any such undesired effects are not referred to as side effects of CBD.

The lack of long-term studies means that pregnant and breastfeeding women should either avoid products containing CBD altogether or should only take them in close consultation with their doctors. There is evidence that CBD may have an effect on placental function due to its mechanism of action.

Even in the case of natural products such as CBD, possible interactions with other medicines/chemical compounds need to be taken into consideration. This particularly applies to all those medications which are metabolised in the same way as CBD. The following active substances are particularly worthy of mention:

Care should also be taken when combining CBD and alcohol at the same time.

The use of products containing cannabinoids may result in interactions with various medications. If you are already taking medication, the use of CBD and other cannabinoids should be discussed with your doctor beforehand.